On October 23, 2018, the Hong Kong-Zhuhai-Macao Bridge was opened to traffic.

To this end, the top leaders of China rushed to Guangdong to witness this moment. Century projects in history have profoundly affected human social life. Similarly, as the longest sea-crossing bridge in the world, some people are still paying attention to its construction cost, the number of future traffic and when it will pay back. Standing at the height of history, the significance of the Hong Kong-Zhuhai-Macao Bridge is immeasurable. 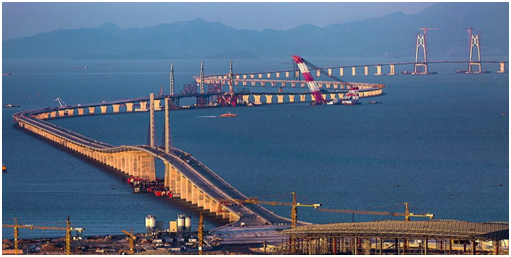 In 1983, Hong Kong chaebol Hu Yingxiang first proposed to build a cross-sea bridge to connect Hong Kong with Zhuhai. Because of his wide-ranging relationship in the mainland, he has laid out many highways and real estates in the Pearl River Delta, and has been calling for it for many years. At that time, the mainland just opened the country door and everything was born. The attitude of British Hong Kong Government is cold on this idea. “The Hong Kong-Zhuhai-Macao Bridge will have actual demand after 20 years.” In 2002, the Pearl River Delta developed as the world factory. In order to connect the expressways on both sides of the Pearl River, Guangdong is preparing to build a tunnel from Shenzhen to Zhuhai, and it has specially rushed to Hong Kong to attract investment. The chairman of the American Chamber of Commerce in Hong Kong, Zhan Kangxin was shocked. If the bridge was built first, Hong Kong would be marginalized. Hong Kong is just like a dream. The Mainland has proposed a “Double Y Scheme”: a Hong Kong, Zhuhai, Macau and Shenzhen, two special economic zones and two special administrative regions are connected by a bridge. However, Hong Kong changed the double Y scheme to a single Y scheme and excluded Shenzhen.