The Red Square is located on the city centre of Moscow, near the Moscow River, is the oldest square in Moscow and the witness place of the important historical events. It is also a place for mass gatherings, large-scale celebrations and military parades in important Russian festivals. It is a world-famous tourist attraction.

The Red Square is 695 meters long from north to south, 130 meters wide from east to west, with a total area of 90.35 million square meters. It is irregularly rectangular and the ground is entirely paved with ancient stone. 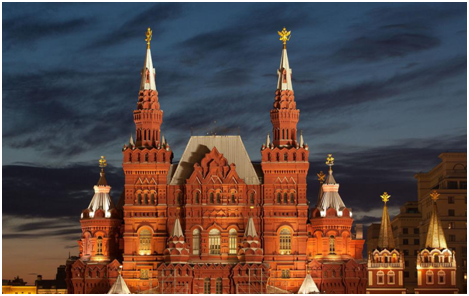 To the north of the Red Square is the Russian National History Museum, to the east is the Moscow State Department Store, and to the south is St. Basil’s Cathedral. On the west side are the Lenin tomb and the red walls of the Kremlin and three towers. The podium is built on the upper level of the Lenin tomb. When Russia’s important ceremonies, the leaders will stand on the tomb of Lenin to watch the military parade.

Red Square International is far more famous than Tiananmen Square, but the area (91,000 square meters) is only about one-fifth of Tiananmen Square. The ground is unique and all paved with stone. Red Square is a testimony to the history of Moscow and the pride of the Moscow people. 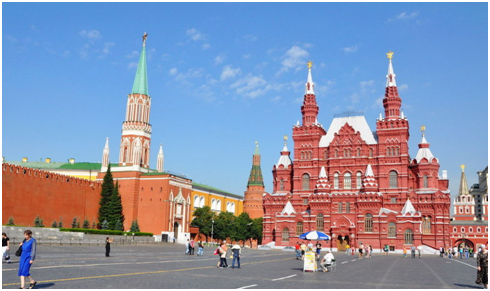 The original name of Red Square is “Torge”, which means “market”. Its predecessor was the “industrial and commercial district of the outside city” that Ivan III developed in the east of the city in the late 15th century. In 1517, a big fire broke out in the square, which was once called the “Fire Square”. In 1662, it was renamed “Red Square”, meaning “beautiful plaza”, with an area of 91,000 square meters. It is located in the city center and is the center of various large-scale celebrations and military parades in the country. It is one of the famous squares in the world.

In Russian, “red” means “beautiful” and “red square” means “beautiful square.” The massive expansion of Red Square was after 1812. In the 1920s, the Red Square merged with the adjacent Vasilevsky Square together. The Red Square is 695 meters long from north to south and 130 meters wide from east to west, with a total area of over 90,000 square meters. The square is paved with crimson square stones, which are shiny.